It is the easy answer to the question that has been on the minds of every Lions fan since the final regular season game wrapped up at Ford Field, “Will Ndamukong Suh return to Detroit as a Lion?”.

The Media has gone back and forth, one day reporting that Suh has interest in Seattle, the next saying that the Lions were the favorite to resign Suh. In the end though, it comes down to how much are the Lions willing to pay to keep a player that has been instrumental in the dominance of the Detroit Lions defense.

While the answer may appear to be easy, don’t be too eager to jump to the “franchise him” conclusion just yet.

What is a Franchise tag?

Wikipedia says this about the Franchise tag:

In the National Football League, the franchise tag is a designation a team may apply to a player scheduled to become an unrestricted free agent. The tag binds the player to the team for one year if certain conditions are met.

Seem’s logical – If the Lions can not come to terms, apply the tag, keep Suh around for another year and they can work it out later. Well, it isn’t that simple.

[pullquote]”I think it’s important for you guys to know that we want him back and we are willing to franchise him, transition him, whatever,” Mayhew said.[/pullquote]If the Lions applied this tag to Suh, he would not be able to test the open market and the Lions would be able to extend the time they have to negotiate a contract with Suh. This sounds great, however, it also comes with a cap hit of $26.87 million.  On top of that gem of a deal, Suh comes with a lovely gift of $9.7 million in “dead” money – that is money that will hit the cap regardless of which team Suh plays for next season. Because his rookie contract included a voidable sixth year, and because the Lions executed two simple restructures on his contract in previous seasons, Suh counts another $9,737,500 against the Lions’ 2015 salary cap in “dead money” from previous bonus prorations. This amount is separate from the Franchise tag number and can not be rolled into any other deal and spread out over future seasons.

With all that being said, if the Lions Franchise Suh, the total amount of money that would be hitting the Lions salary cap would be $36.6 million total or roughly 25% of next year’s projected $143 million cap.

If the Lions choose to go with the Non-Exclusive tag, Suh would be able to field offers from other teams, however, the Lions would have the opportunity to match if they wanted to. If they decide that the price tag is too high, they could let him go and receive two compensatory first round picks. This seems like the best way to go if the Lions decide to go with the tag. While Suh will entertain some pretty lofty offers, if the Lions decide that the juice is not worth the squeeze, well, the 2016 and 2017 drafts just became more interesting.

This choice doesn’t even make sense and they would be dumb to choose it and give up two first round draft picks, so I won’t even entertain the idea. 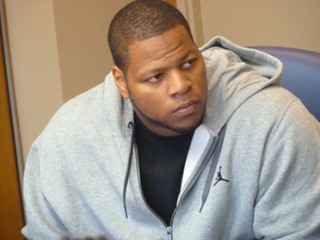 So what happens if they apply the Franchise tag and take the cap hit?

The first thing that you could count on is that there would be some familiar faces that would not return. With 3 players set to command almost half of the teams salary cap (Calvin Johnson, Matthew Stafford and Ndamukong Suh), players like Stephen Tulloch are hitting the cap for $5,800,000 and are now looked upon as potentially expendable. If cut before June 1 – the Lions could save $3.2 million, with $2.6 million in dead money hitting the cap regardless if he is on the team or not.

Mayhew on franchising Suh: "If we decide to franchise him, we'll have room."

Another option could be a simple contract restructuring by Calvin Johnson. CJ hits the cap the hardest with $20,558,000. He has stated in the past that he will do anything to help the team retain Suh, now would be the time for that if he is serious.

What do you think Nation? Now that you know the details of what it means to lay the Franchise tag on Suh, what would your choice be if you were given the chance to make it?