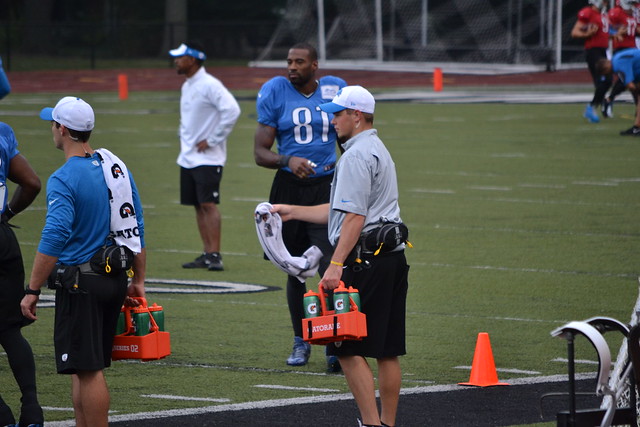 On Monday, the Detroit Lions traveled almost two miles west on Rotunda Drive from their Allen Park training facility to practice at Edsel Ford High School in Dearborn. The practice was not open to the general public but was part of the team’s “First Responders Appreciation Night.”

The practice was a typical Detroit training camp practice, with the exception that it was in front of approximately 1,100 Lions supporters from the fire departments, police departments, and medical rescue workers from Dearborn, Allen Park, and Detroit–in addition to the Wayne County Sheriff’s Department. Military personnel, as well as the families of the first responders were also invited. 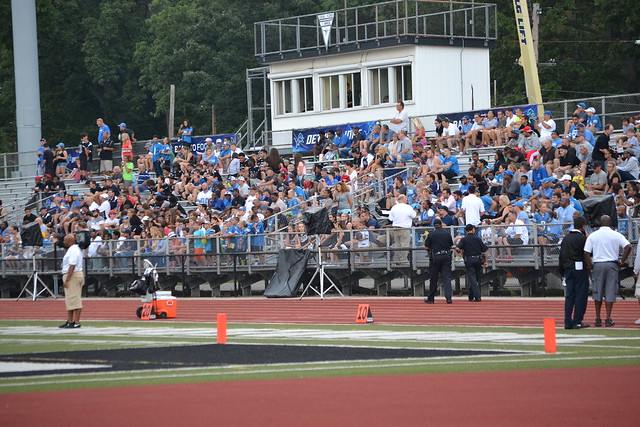 Slated to begin at 7:30 pm, with gates opening at 6:30 for invited guests, a rain shower dampened expectations, but abruptly ended as soon as Lions head coach Jim Caldwell addressed the crowd.

“We thank Edsel Ford High School for allowing us to come over and work. Our guys are looking forward to it and also, the fans that you all see are from the first responders here in Allen Park and Dearborn. EMTs, police, fire department, Sheriff’s Department of Wayne County as well, so we’re excited about having the opportunity to interact with them for all that they do for our community.” Caldwell said prior to practice.

He stated that although many people call football players “heroes” that it was the people in the stands that were the true heroes, working around the clock 365 days per year to keep the community safe.

“Obviously the sacrifices they make to serve and protect us is just absolutely outstanding. I think often times, people don’t realize until they’re in trouble what kind of jobs these folks do, but they make sacrifices for us, not only with their job and putting their lives on the line, but their families as well. A lot of them are away from their families and have odd hours, so we certainly appreciate that.” Caldwell continued.

As for the practice, it was business as usual. It began with stretching and calisthenics. Then special teams practice kick returns. The Lions players then broke off into personnel groupings, and performed individual drills as well as working in units.

Near the end of the practice, the first-team offense and defense squared off against each other, in 11-on-11 drills, followed by the reserve players. Then the team practiced the “2-minute offense” including getting into field goal range for both placekickers in camp (Matt Prater, and former Plymouth High School standout Kyle Brindza, a 2015 undrafted rookie out of Notre Dame).

Quarterback Matthew Stafford lined the offense up into “victory formation,” took a knee, and shortly thereafter, the practice was over. The team met near mid-field, to get instruction from the coaches, and then some of the players walked over to the fans to sign autographs, for those who stayed throughout the entire evening. 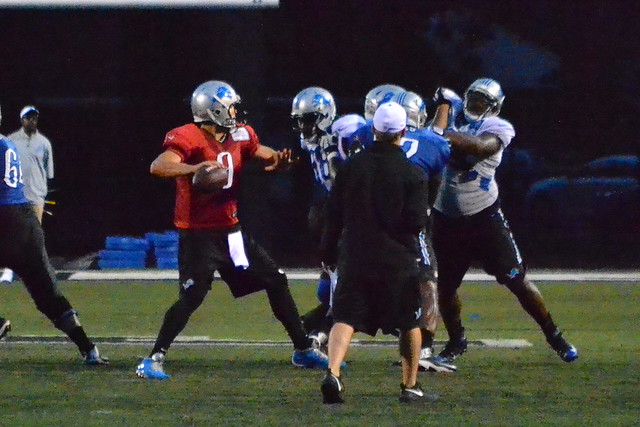