In 1959, Montreal Canadiens goaltender Jacques Plante made hockey history by being the first to wear a mask. In the years since goalies everywhere have turned their masks into portraits of personal expression. The Detroit Red Wings have been fortunate to employ some of the game’s greatest ‘tenders, and the Winged Wheel has been the inspiration of some incredible mask designs. Here are the Top 5 mask designs in Red Wings history.

Why is Jim Rutherford’s minimalist design on this list? Simple – because it got the ball rolling in terms of mask artwork. He was the first goaltender to add a painted design to his mask, and a new trend was born. To think that simply adding small wings from the iconic Red Wings logo above the eyes would lead to the artwork on today’s masks is incredibly cool.

Fans tend to forget Curtis Joseph’s tenure with the Red Wings. Something they can’t forget, however, is the mask he wore. The edition of his iconic rabid dog artwork inspired by Steven King’s infamous novel “Cujo” looked as good in red as any of his previous masks. 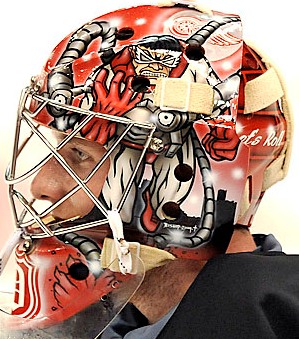 Jimmy Howard took Detroit’s octopus-throwing tradition and put a whole new spin on it in the form of a goalie mask. Only this time, it wasn’t “Al the Octopus”, Detroit’s mascot – it was the infamous Doctor Octopus from Marvel Comics and Spiderman 2. The first time a Marvel icon appeared on a Red Wings painted mask, and it was a beauty.

Dominik Hasek’s trade to Detroit in 2001 gave the Red Wings one of their integral pieces to their 2002 Stanley Cup championship. His mask’s tribute to the Motor City featured an eight cylinder engine whose fumes formed the second half of the legendary Red Wing logo.

The 1997 Conn Smythe Trophy winner’s mask design was, in a word, flawless. Being an Original 6 team, his mask artwork paid homage to the classic simplicity of the Red Wings logo. It certainly also helps that he was wearing this design helping Detroit win their first Stanley Cup title in 42 years.

By Michael Whitaker
Follow:
Always at the front lines of Detroit Sports.
Previous Article First half drought too much to overcome for Michigan in 80-67 defeat
Next Article 4-star Detroit King CB Lavert Hill chooses Michigan over Michigan State