It’s now been more than three months since the San Francisco Giants clinched the 2014 World Series with a 4-3 victory over the Kansas City Royals. And with just two months left until the new MLB season begins, excitement is building for baseball’s return.

Despite being defeated by Baltimore in the American League division series last season, hopes are high for the Detroit Tigers among fans in 2015 (they are 12/1 with betfair to win the World series). If they are to win their first World Series since 1984, however, they will have to overcome some stiff competition from well-fancied rivals. Here, we will examine the men who could make the difference in 2015 for five of the favorites to win the World Series.

The Washington Nationals enjoyed an outstanding season in 2014, finishing champions of the National League East Division before losing out to the Giants in the playoffs. In the close-season, they have recruited well and will be confident of making it beyond the Division Series in 2015. As much as it will hurt Detroit fans, arguably the best signing made by the Nationals has been Max Scherzer. The pitcher is a genuine star of MLB and he will be a real loss to the Tigers. He recorded a 3.19 ERA in 2014 with the Tigers, pitching a career-high 220 1/3 innings and striking out a career-high 252 batters. At 30-years-old, Scherzer is at the top of his game and he will be confident of adding another All-Star appearance to his name in 2015 having previously made the cut in both 2013 and 2014. If Scherzer can shine as starting pitcher for the Nationals, then they will take some beating in 2015. 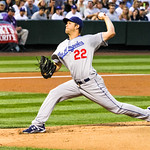 Dodgers starting pitcher Clayton Kershaw is a benchmark against which up and coming young stars are measured. By the age of 24, Kershaw already had a pitcher’s Triple Crown, a CY Young award and more than 700 innings pitched under his belt. Now, at 26, he is at the peak of his powers and he is destined for another stellar year in 2015. Over the course of his career, Kershaw boasts an ERA of 2.48 and has more than 1400 strikeouts. He has been named to the All-Star team and recorded the lowest MLB ERA for each of the last four years. Last June, Kershaw threw a complete game no-hitter against the Rockies and recorded 15 strikeouts in the process. For all of his individual honours, however, Kershaw has yet to lead his team to glory. The Dodgers may have been crowned National League West Champions for the last two seasons, but they have not won a World Series since 1988. If Kershaw is to be considered alongside the true greats of the game then he will need to help the Dodgers put that right. 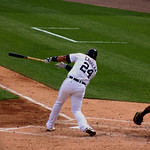 Miguel Cabrera may not be fit quite in time to start the MLB season, but he will certainly have a big part to play as the 2015 campaign progresses. First emerging from the Marlins’ minor league system in the early 2000s, Cabrera became a star in Florida before being traded to the Tigers in 2008. Now 31, Cabrera is a nine-time All-Star and has been named to the team for each of the last five seasons. A powerful, destructive right-handed hitter with the ability to send the ball to all fields, Cabrera has a career batting average of .320 and has hit 390 home runs. Last season Cabrera failed to live up to his own high expectations, recording a regular season batting average of .313 (against averages of .330 in 2012 and .348 in 2013) and recording 25 home runs. Cabrera has been troubled by a stress fracture in his right foot in recent months, as well as having a bone spur in his right ankle. Having undergone surgery to repair these injuries, he will be desperate to get back out onto the field and rediscover his best form in 2015. 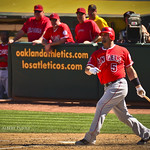 In 2014, Cabrera was nominated for the Gold Glove Award for first base, alongside Albert Pujols of the Angels. At 35 years of age, Pujols may be entering the latter years of his MLB career but his past achievements and reputation still make him a formidable opponent. Originally drafted by the Cardinals in 1999, Pujols was crowned the rookie of the year in 2001 and quickly gained a reputation as a hitter with ability, power and patience. Pujols arrived at the Angels after 10 years with the Cardinals, and, having signed a 10-year contract, much was expected of him. Unfortunately in his three seasons so far, Pujols has failed to live up to expectations, recording an average of .285 in 2012, then missing much of 2013 through injury. The year of 2014 was an improvement for Pujols, but he will desperately be hoping to improve further in 2015. As a two-time World Series winner, nine-time MLB All-Star and three-time National League MVP, there is no doubting Pujols’ talent. If he can regain some of his best form then he could make a real difference to the Angels’ prospects this year.

Originally drafted by the Cardinals in 2011, Kolten Wong eventually made his MLB debut in August 2013 and has since been one to watch. The second baseman was awarded National League Rookie of the Month of May last year after batting an impressive .333 average for the month. Injury stifled his progress but after a short spell on the disabled list he returned with five home runs in seven games. Last season the Cardinals lost out in the League Championship series to the Giants, but Wong was able to make an impression on the big stage. He hit a walk-off home run in the third game. Defeat to the Giants will have proved painful for Wong, but the experience should stand him in good stead for this season. The 24-year-old ended 2014 third in the voting for National League Rookie of the Year and with three home runs in eight post-season games. Wong still has a long way to go in baseball, but 2015 could be his breakthrough year.