As Detroit sports fans, we have been blessed through the years with incredible athletes doing amazing things for our beloved teams. Unfortunately, we have also been privy to some of the biggest letdowns in sports. Today we take a look at the top 10 biggest busts in Detroit’s recent sports history. 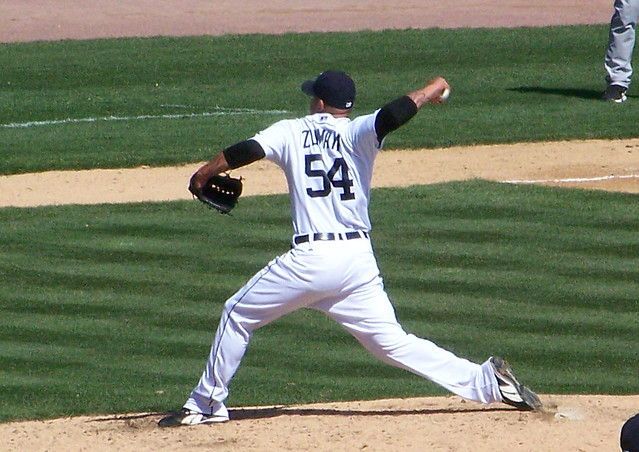 2006 was an amazing year for the 101-mph flame-throwing rookie. He produced a 1.94 ERA in 62 appearances in relief for the Detroit Tigers, including an incredible post-season performance. He went on to play four more seasons for the Tigers, but his career would be marred by injuries and ineffectiveness. Zumaya never quite recaptured the success of his stellar rookie season.

The Red Wings made a big splash in the summer of 2003, signing the homegrown defenseman to a 5-year $30-million contract. The honeymoon didn’t last long though as Hatcher tore his ACL early in the 2003 season and was out for most of the year. The NHL lockout took away the 2004 season and the Red Wings bought out Hatcher’s contract prior to the 2005 season.

Coming off a spectacular playoff performance in 2008 for the Chicago Bulls, Ben Gordon was signed by the Detroit Pistons to a 5-year $55 Million deal. Whatever spark Gordon had for the Bulls was lost in transition, popping up at random points of the year (above) before returning to dormancy. In a salary-cap move, the Pistons traded Gordon and a very costly 1st round draft pick to the Charlotte Bobcats for Corey Maggette. This is not Charles Rogers’ team photo. It’s his mug shot. It seemed Rogers spent more time in the back of a cop car than he did on the field for the Detroit Lions. Rogers was the #2 pick in the first round of the 2003 draft but managed to stay in the NFL for only three seasons. He was a star wide receiver at Michigan State and at the time, seemed worthy of his draft status, but his career was crippled by legal issues and drug & alcohol problems. Sadly, Rogers passed away in November of 2019. The 1989 Heisman Trophy winner had a cannon for an arm and put up huge numbers during his career at the University of Houston. Big things were expected of the quarterback when the Detroit Lions drafted Ware with the seventh pick of the 1990 NFL Draft. It didn’t happen. He would start only six games in four years for the Lions before being released after the 1993 season.

To the rejoice of Red Wings fans, Uwe Krupp was signed away from the Colorado Avalanche before the 1998-99 season. The big, powerful defenseman was supposed to fulfill the role that Wings fans have longed for. But just two months into his first season with the Wings, Krupp was sidelined with a back injury. What followed was not only disappointing for Wings fans, but just plain strange.

Very long story short, Krupp was suspended by the Red Wings for a total of two seasons for not supplying medical records and violating his contract by competing in a dogsled race. Lawyers were involved. After that mess was settled, Krupp returned to the Red Wings for the 2001-2002 season. Two games in he was injured again, missing most of the season. He was not resigned. But hey, at least he made it to the 2002 victory parade:

Widely considered Joe Dumars‘ last-ditch effort to save his job, the Detroit Pistons signed power forward Josh Smith to a four-year $54-million contract in the summer of 2013. He was released on Dec 22, 2014. The Pistons followed by winning 11 of their next 13 games.  Addition by subtraction in blatant form. However, the Pistons still owe Smith $5.4 million per year for the next five years.

It seemed as though Detroit Tigers GM Dave Dombrowski had pulled off the impossible by bringing home Prince Fielder. Most Tigers fans remember Prince’s father, Cecil Fielder, smashing home runs into the Detroit sky at Tiger Stadium. The story was coming full circle. Fielder was a prized free agent and in January of 2012, the news of the signing shocked the baseball world. Prince and Miggy hitting back-to-back? Look out American League pitchers.

While he did hit some impressive homers during his short time with the Tigers, Fielder was a big flop in the playoffs, finding himself on the wrong end of the boos at Comerica Park. Dombrowski shocked everybody again when he was able to trade Fielder to the Texas Rangers for second baseman Ian Kinsler after the 2013 season, ridding the Tigers of that nine-year $214-million contract.

Often looked at as Joe Dumars‘ biggest mistake, Milicic was drafted second overall by the Detroit Pistons in 2003, ahead of Carmelo Anthony, Dwyane Wade and Chris Bosh. Milicic never came close to the superstar status those three players did. However, Darko would become a fan favorite at the Palace of Auburn Hills. Known as the “Human Victory Cigar,” he would often come off the bench when the Pistons were in control late in games.

If you live in the state of Michigan, odds are that you root for Detroit teams and either Michigan or Michigan State. (If you...
Read more
- Advertisement -
Detroit Lions News

4 Detroit Lions veterans who are on the roster bubble

With the 2020 NFL Draft in the books, we are starting to get a much better idea of what the Detroit Lions roster will...
Read more
Detroit Lions News

Let's face it, there have not been many times in history where being a fan of Detroit sports has been as bad as it...
Read more

If you live in the state of Michigan, odds are that you root for Detroit teams and either Michigan or Michigan State. (If you...
Read more
Detroit Tigers News

When we think about the best athletes in the world, we usually think about players who are in tip-top condition. They can run fast,...
Read more
College Sports

5 Reasons why we can ALL hate the Ohio State Buckeyes

This is Detroit Sports Nation and whether you are a fan of the Maize and Blue or the Green and White, we can all...
Read more
Detroit Lions News

No matter the sport, referees make mistakes. That being said, it seems like teams from the state of Michigan seem to get jobbed by...
Read more
- Advertisement -