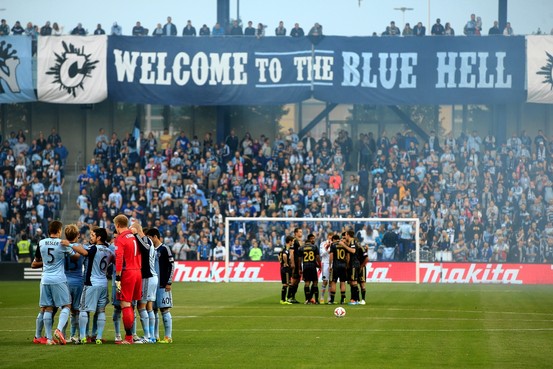 How many people really ever saw this happening?  America’s game, Football, turning to Soccer for research on how to attract fans?  Wow, that’s about all that can be said I suppose.

Yes, soccer is nowhere as big as football in the USA currently, but it is growing at a pretty quick rate.  Not to mention it is the fastest growing sport in the college age demographic, and it’s easy to see why.

Make the Stadium Experience Better: drop concession prices, make the seats bigger, and implement Wi-Fi so people can use their smartphones to show how great the experience is.  The MLS has implemented Wi-Fi across the majority of their stadiums so that fans can share their experiences across social media to show off what the MLS experience is like.

PLAY BETTER OUT OF CONFERENCE GAMES: Yes, I understand this is also the NCAA’s fault, as there is no incentive to play a stronger OOC schedule, but doing that will attract more fans.  Look at what MSU is doing, they’re playing a home and home with Oregon in 2014 and 2015, this is a HUGE win for both teams, as they both get a top non-conference game which will almost guarantee a sellout for both of them.   The NCAA needs to find a way to make playing a tougher OOC schedule more rewarding for programs instead of playing these FCS teams that they roll over.

Tickets, Tickets, Tickets: No one is asking for $5 tickets here, but $150 for a ticket to an in-conference game against a team like Indiana is just inhumane.  Games should be financially feasible for people to attend, make it a family experience instead of a “We need to find a babysitter because I can’t pay $150 per ticket for 4 tickets.”  Add family packages, have kids’ days, things to bring families to the school and make things more affordable.  Not to mention bringing down the cost of students tickets.  Some schools are starting to even price their own students out of tickets *cough* UofM *cough* so that you won’t have much of a student section anymore, if any at all.  I mean what is a college football game without a student section?  I can go to an MLS game and sit in a great seat at Toyota Park for around $50, or I can sit field level for $100, not to mention their supporters section tickets are only $20 a game, they are standing room only tickets, but who sits down when you’re a chanting fanatic who loves their team.

Super fans to the Rescue: Embrace these people; create supporter sections similar to what they have for soccer.  If people want to buy tickets to be in these sections to yell, chant, cheer and just be crazy, then let them.  Let people who just want to sit and enjoy the game do that too, that’s something that really separates soccer from football, the fanatics all sit together, and you hear them chanting, cheering, etc. but at football games they’re all spread out.  Could you imagine the increase in volume if you sat these people together?   It could be absolutely daunting for schools to deal with.

Can the NCAA learn something from what MLS is doing?  Of course it can.  If it wants to keep the young college age demographic, it’ll have to make changes, or face the facts that these kids might not want to come see their own college teams play anymore because they’re priced out, or even sat in areas that they don’t want to be.  Hopefully the NCAA can make some changes so that we can keep college football around for a long while.  I am a soccer fan, but I’ll be damned if I don’t love me some football too, and to be able to combine the experience of sitting in a soccer like supporters section, but at a college football game would be the greatest thing ever.

If you want to see what a supporters section is like, I fully encourage you to go watch a DCFC game at Cass Tech.  Those people are some of the best fans I’ve ever came across.   They’ll teach you all the chants and they will show you one hell of a time, not to mention they might convert a few soccer doubters into fans.  They don’t have too many games left this season, but I do recommend checking them out if you get the chance, as it’s definitely worth it.

Don’t forget to support “Angels for Kayla” it’s an amazing cause and every dollar counts.